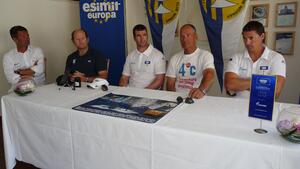 In Split European Laser Radial Youth Championship 2013 is on its way. For Vasilij Žbogar, member of the Esimit Sailing Team, the Championships will be his first test in a coaching role. Vasilij works with young perspective Russian sailor Dimitrij Tretjakov under the initiative of the Esimit Europa project, where Olympic sailors, members of the Esimit Sailing Team, coach young talents in the sport. Before practice, representative of International Laser Class Association (ILCA) Jean-Luc Michon, Croatian Olympians Ivan Kljaković Gašpić and sailing legend Minski Fabris along with the most successful Slovenian sailor Vasilij Žbogar, discussed current matters of Olympic sailing.

Jean-Luc Michon, representative of International Laser Class Association (ILCA), Croatian Olympians Ivan Kljaković Gašpić and sailing legend Minski Fabris along with the most successful Slovenian sailor Vasilij Žbogar by initiative of the Esimit Europa project opened the Championships with a discussion about Olympic sailing. At the beginning they highlighted that the conclusion of the European Laser Radial Youth Championship 2013, which was on Croatia's Statehood Day entered by 290 young sailors aged 18 and under, aligns with the accession of Croatia to the European Union on 1. July. Organisers of Championships will mark this occasion with a special regatta field in front of Split's riva. Olympic sailors and members of the Esimit Sailing Team, Ivan Kljaković Gašpić and Vasilij Žbogar also remembered their beginnings in Laser Class in Split's aquatorium. They touched base on sailing with Esimit Europa 2, as one of the Europe's most successful  sailing projects, connecting top performance sailing, diplomacy and economy, while at the Championships Esimit Europa also stands as their partner. Experience of being part of a team is valuable for sailors who are at the Olympic level sailing as individuals. Spokespersons talked also about rich heritage of Laser Class sailing in Split and changes and challenges undergoing in the past couple of years. Sailing is with every Olympic cycle becoming more and more professional, sailors are professional athletes, practicing every day with the support of their coaching staff and nothing is left to coincidence. At the Olympic Games in London they have also brought sailing closer to the spectators.

Vasilij Žbogar will before the two peaks of the season in Finn Class – European Championships in Germany at the end of July and World Championships in Estonia at the end of August – try out a new role. In Split he will follow young Russian talent Dimitrij Tretjakov in light of initiative of the Esimit Europa project. »I am looking forward to my new role. Of course Olympic sailing remains my priority, with the goal of Olympic gold in Rio 2016. I can say I have a lot of experience from Laser Class, as I came to my knowledge of it by myself. Through my 12-year career I rarely had the opportunity to work with a coach, that is why I did many mistakes, which were usually pretty expensive, but at the same time very valuable. It is my pleasure to help younger sailors,« said Žbogar before the start of the Championships and added: »Dimitrij and I have practiced for a couple of days in Valencia, and I see a big potential in him to achieve top results at the upcoming races and sometime in the future even take his part at the Olympic Games. Even though Dimitrij and I did not practice much together, I believe he made progress already and I hope he will show it also at the regatta.«