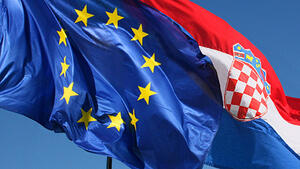 On first July 2013, Croatia became a full member of the European Union. On this occasion, Igor Simčič, founder of the Esimit Europa project, congratulated Croatians on their accession to the EU with the following words:

Dear citizens of the Republic of Croatia,

at the Esimit Europa project we are sincerely looking forward to Croatia's membership in the European Union. Europe without borders, based on trust, mutual respect and dialogue, is the 20-year-old vision of our project, which is realized in the fields of sports, diplomacy and economy. Only such Europe, open and inspired by common goals, leads to a brighter future. Through the Esimit Europa 2 yacht, the Esimit Europa project establishes close relationships among sailors from 10 nations, encourages dialogue between diplomats and partnerships between companies of the entire European continent. In this context, I am pleased that on a symbolic level last year we accompanied Croatia on the path of European integration by welcoming one of the best Croatian sailors Ivan Kljaković Gašpić to our pan-European team of word renown professional sailors, while the initiative was also supported by the Croatian Foreign Minister Dr. Vesna Pusić.

We have joined Croatia, a country with a rich maritime tradition, talented young sailors and perfectly organized regattas, as a partner of the largest regatta Fiumanka, which recently passed the solemn spirit of the Croatia’s accession to the EU. As a partner we have also supported European Youth Sailing Championship in Laser Radial class in the city of Split, because we believe that young successful sailors are role models for the youngsters and have great potential and by our initiative also the support to reach top results in the Olympic sailing classes and on the big boats. Sailing is a sport that unites, enhances cooperation and teaches people how to subordinate individual goals to the ones of a team. This is the motto that the Esimit Europa project pursues at all the levels of its operation. And that is our vision of Europe in the 3. millennium.

Greetings, citizens of the Republic of Croatia, in the heart of Europe!