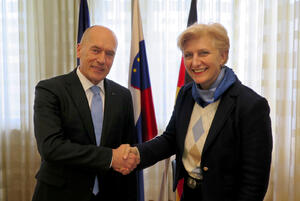 Ambassador of Germany in Slovenia, dr. Anna Elisabeth Prinz, today at the premises of the German Embassy in Ljubljana welcomed the founder of the Esimit Europa project, Igor Simčič, who presented to the Ambassador the project’s achievements and future plans. The Ambassador, who first got acquainted with the project during last year, established her support by the official invitation of the Esimit Sailing Team to the reception at the Embassy this season. The Esimit Sailing Team is lead by the sailing legend and one of the best sailors of all time, Germany’s Jochen Schümann, two time America's Cup winner and four time Olympic medalist.

The Esimit Europa project since 1995 with its supporters interconnects diplomacy, business and sports in a unique way. Under the European flag it united Europeans on one yacht and it furthermore obtained the trust of the Russian Federation. Since 2010 one the world’s fastest and most technologically developed sailing yachts – Esimit Europa 2 – connects the entire European continent. Esimit Europa 2, with 28 consecutive wins, carries the message of a successful united Europe around the globe. The yacht on board joins exceptional sailors, Olympic medalists, winners of the America’s Cup and Volvo Ocean Race, World and European champions, from 10 different countries. The project is under the patronage of José Manuel Barroso, President of the European Commission and supported by Martin Schulz, President of the European Parliament, Sergey V. Lavrov, Minister of Foreign Affairs of the Russian Federation as well as by many other prominent European diplomats and businessmen, among whom is also Angela Merkel, who expressed her congratulations to the successes of the project.

In occasion of today’s meeting at the Embassy of Germany, the Ambassador dr. Anna Elisabeth Prinz stressed: “This project carries an important message of relevance of collaboration, mutual trust and responsibility. The yacht with its multinational team, lead by the German sailing legend Jochen Schümann, is a wonderful symbol for conveying such message. The Esimit Sailing Team last year also participated at the world's biggest sailing event, famous German Kieler Woche, where they took line honours at both races and moreover set a new course record. Following their successes, I am pleased to extend the invitation to the Esimit Sailing Team to the reception at the Embassy in Ljubljana. I am also very happy that the significance of this project has been acknowledged also by the leaders of German business, with BMW and Adidas as project’s partners.”

Igor Simčič, founder of the Esimit Europa project added: “I would like to thank the German Ambassador for her support to the project and the invitation to host the Esimit Sailing Team. It is a recognition to our endeavors and all our team members, as we are designing greater plans for the future seasons.”