The Esimit Europa project received the official support from the President of Cyprus, Nicos Anastasiades 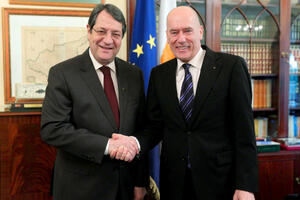 At this occasion the President of Cyprus, Nicos Anastasiades, emphasized: “The Esimit Europa project with its symbol, the Esimit Europa 2 yacht, embodies the core values of modern Europe and is actively promoting the European goals and ideas, to which Cyprus is fully committed. The Cyprus Government and myself offer our full support to this project in the belief that it will be further promoting the unity, friendship and cooperation of all European nations and people.”

Igor Simčič, founder of the Esimit Europa project thanked the President for his support and said: “It is an important recognition to our constantly growing project which promotes values of collaboration, responsibility and solidarity. Such acts of official support give us strength to continue with even greater plans in the future, but most of all help us to fulfil our mission of connecting diplomacy, business and sport on the highest level.”