Europe is a winning team 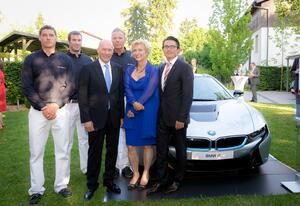 The German Embassy in Ljubljana today hosted a reception in cooperation with BMW Group Slovenia; the leading premium manufacturer presented the most progressive model BMW i8 and the Esimit Europa project with one of the fastest and technologically most advanced yachts in the world, which is led by the German sailing legend and one of the best sailors of all time, Germany’s Jochen Schümann, two time America's Cup winner and four time Olympic medalist. The partners in this event all share their commitment to innovation, growth and high-tech development, and their common message is that Europe represents a winning team. The reception was enlivened by a rich cultural program including the opening of the exhibition “A Floating Life” by the German artist Erika Mayer and paintings by the Slovene artist Danijel Lovro Fugger.

The Ambassador of Germany in Slovenia, Dr. Anna Elisabeth Prinz, today at the residence of the German Embassy in Ljubljana hosted a special reception for guests from the fields of business, sports and diplomacy. At the reception, named Europe Is a Winning Team, she presented two partners that are connected with Germany, but have in past decades marked the European space in a unique way, who managed to be a thorn in their competitors’ side by relying on European values, technological development, innovation and a long-term vision – BMW Group Slovenia and the Esimit Europa project.

With its three brands BMW, MINI and Rolls-Royce, the BMW Group is the world’s leading premium manufacturer of automobiles and motorcycles. As a global company, the BMW Group has a global sales network in more than 140 countries, including Slovenia. The success of the BMW Group has always been based on long-term thinking. The BMW Group is ready to play the leading and trail-blazing role in the design of personal mobility on the premium level in the future. At the event, the general manager of BMW Group Slovenia, Lothar Schupet, stated: “Research and development, part of the i project since 2007, have set the foundations for sustainable mobility, which is directed by environmental, economic and social changes in Europe and in the world. The BMW Group follows the integral approach embodied in the BMW i brand to create the needed harmony between personal demands and mobility services with premium character, which is clearly highlighted in sustainable development. The completely electric BMW i3 and sporty hybrid BMW i8 are the two models that embody our vision of sustainable mobility.” At the end of his speech, Lothar Schupet stressed the excellent cooperation with the German Embassy in Ljubljana and the Esimit project. At the reception, representatives of BMW Group Slovenia presented the BMW i8, a car with the attributes of agility, mobility and exceptional efficiency. The BMW i8 presents a revolutionary and future-oriented interpretation of the typical BMW driving pleasure – and that makes it the most progressive model in the segment of sports cars in the world.

With its supporters, the Esimit Europa project has interconnected diplomacy, business and sports in a unique way since 1995. Under the European flag it united Europeans on one yacht and, furthermore, it obtained the trust of the Russian Federation. Since 2010 one the world’s fastest and most technologically developed sailing yachts – Esimit Europa 2 – has connected the entire European continent. Esimit Europa 2, with 28 consecutive wins, carries the message of a successful, united Europe around the globe. The yacht on board joins exceptional sailors, Olympic medalists, winners of the America’s Cup and Volvo Ocean Race, World and European champions, from 10 different countries. The project is under the patronage of José Manuel Barroso, President of the European Commission and supported by Martin Schulz, President of the European Parliament, and Sergey V. Lavrov, Minister of Foreign Affairs of the Russian Federation, as well as by many other prominent European diplomats, businessmen and politicians, among whom is Angela Merkel, who has expressed her congratulations on the successes of the project.

The Ambassador first got acquainted with the project during last year when Esimit Europa 2 participated in the world's biggest sailing event, the famous German Kieler Woche, where they took line honours at both races and moreover set a new course record. The significance of this project has been acknowledged also by the leaders of German business, with BMW and Adidas as the project’s partners. Igor Simčič, founder of the Esimit Europa project, said: “This project carries an important message of relevance of collaboration, mutual trust and responsibility. The yacht with its multinational team, led by the German sailing legend Jochen Schümann, is a wonderful symbol for conveying such a message. We receive support from more and more prominent diplomats and businessmen around the world, which gives us recognition and strength for further development."

The reception was enlivened by a rich cultural program, first with the opening of a unique glass sculpture exhibition “A Floating Life” by German artist Erika Mayer and a presentation of paintings by Slovene artist Danijel Lovro Fugger, followed by a special performance by the amazing Helicon players of the Ljubljana Music & Ballet Conservatory and the pianist Matjaž Ferenc.

At the occasion of today’s reception at the Embassy of Germany, the Ambassador, Dr. Anna Elisabeth Prinz, said: “I am hosting this reception to show how much more we can achieve if we join hands and think out of the box. Europe needs inspiration by engineers, businessmen, artists, sportsmen, diplomats; all those who want to make Europe a winning team in fair competition and good spirit with its neighbors. The challenges of the future are so huge that we need to join ideas but also need inspiration from other cultures, from art and music to create a future that is valuable and peaceful. Competition in sports, like with the Esimit Europa, leads to new inventions. New cars need to be environmentally friendly; diplomacy needs the same spirit of cooperation. This is the story of our joint reception: Europe is a winning team if we cooperate well and move forward, benefitting also from the power of our culture, music and art.”