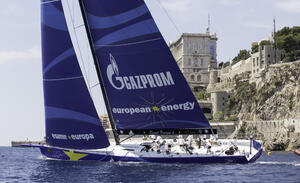 After 24 hours, 35 minutes and 56 seconds of sailing (at 12:35:56 CEST), Esimit Europa 2 was for the fourth time first to sail over the finish line of the Giraglia Rolex Cup, which is its jubilee 30th consecutive line honours victory. Monegasque Pierre Casiraghi, member of the Yacht Club de Monaco’s Board Committee, who was sailing as one of the helmsmen with the multinational Esimit Sailing Team, proudly helmed the yacht into the Port Hercule where the yacht club is located. Second over the finish line was Robertissima III, while Alegre and SFS are struggling for the third place.

In a competitive fleet of 206 yachts representing 17 nationalities, Esimit Europa 2 started the offshore race at noon on 18 June on a course of 241 nautical miles, which was set from St. Tropez, around the Giraglia Rock, to this year’s exceptional finish in Monte-Carlo, where the opening of the Yacht Club de Monaco’s new clubhouse takes place.

Skipper Jochen Schümann was satisfied with the results: »The beginning of the race was the most difficult one, because it was, as forecasted, a very light wind already at the start, but thanks to the right strategy, we were leading already after the first rounding mark and we took control of the fleet. We then left towards the open sea, while Robertissima III chose to sail along the coastline and picked better breeze, but later on we took the lead again and the breeze got better and better, so we had a relatively quick race from there.” He also highlighted the fantastic cohesion onboard: “The team did a great job and Pierre is a good sailor, he took the role of the helmsman in the watch system and he was clearly one of us.«

At 3 am Esimit Europa 2 passed the famous Giraglia Rock sailing with 16 knots in up to 18 knots breeze in a sharp turn. The navigator Boris Herrmann said: » It was a smooth night with quite a few gybes to the rock. Overall the pattern of the winds unfolded exactly as predicted. We never got parked or slowed down that much in the light spots, which is great and moved our estimated time of arrival forward for a bit at the end. «

The founder of the Esimit Europa project, Igor Simčič: “This Giraglia Rolex Cup was very special for us, first because we welcomed Monaco as the eleventh European nationality in the team with Pierre Casiraghi sailing with us, and also because we finished our 30th race with line honours in front of our home yacht club – Yacht Club de Monaco, a great performance on the occasion of the inauguration of the new clubhouse.”

Helmsman Alberto Bolzan, who has been with Esimit Sailing Team since the beginning, and now joining the next Volvo Ocean Race with Alvimedica, on his last race with Esimit Europa 2 this season: » For me it was a great race before I take a break for one year with another project, but everybody will be happy to get together in the next season and I hope to bring some new experiences from the Volvo Ocean Race. «

Monegasque Pierre Casiraghi, who took the role of one of the helmsmen, was excited after the race: “Being able to be at the helm of this boat was just fantastic for me. Any sailor would dream to be able to be in this position.” In his first race with the fastest and technologically most advanced European yacht, who sailed under the European flag, he stressed how much he appreciated to collaborate with such a top level team: “It is a fantastic crew, we have eleven countries onboard and everything works fine and is very organized. We have also seen the Giraglia rock even though we passed it during the night, the moon was shining through and we passed it in 16, 17 knots, it was much faster than we expected.”
At the prize giving on Saturday June 21st at noon, the trophies for first yacht in real time and the first yacht to round the Giraglia Rock are already secured for Esimit Europa 2.

The Esimit Sailing Team set an amazing course record of 14 hours, 56 minutes and 16 seconds at the Giraglia Rolex Cup 2012, smashing the previous one by 3 hours and 6 minutes.