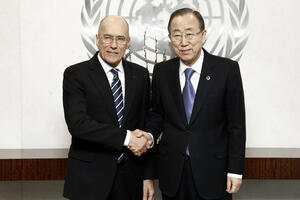 The Secretary-General of the United Nations, H.E. Mr. Ban Ki-moon, received Igor Simčič, founder of the Esimit Europa project on the official meeting at the UN headquarters in New York as a sign of recognition of endeavours of the project that has been connecting nations, countries and people in pursuit of common success for 20 years already.

The Esimit Europa project was founded with the aim of uniting people and promoting stronger collaboration between the European countries, as well as with a vision of building bridges between the worlds of sports, diplomacy, social responsibility, culture and business.

The recognition of the project, represented by the Esimit Europa 2 yacht and its multinational crew, by the Secretary-General proves that the project is a good example and a unique platform for a cooperation of different spheres, growing into a worldwide dimension.

The Secretary-General of the United Nations, H.E. Mr. Ban Ki-moon, was enthusiastic about the concept behind the Esimit Europa project, which he believes includes all the most important values that are also embraced by the United Nations such as collaboration, responsibility and mutual trust.

During the official meeting on 6 February 2015 that was carried out in a friendly atmosphere, H.E. Mr. Ban Ki-moon showed his respect and interest in the project by stating: "I am very much interested in your project and how the United Nations can help you and how you can help the United Nations. What you are doing is very important since you are helping us a lot in obtaining peace, development and harmony. I wish you all the best with the implementation of the project also on other continents."

The Esimit Europa project is proud to represent one such example and to help to deepen United Nations’ values with the help of the unifying power of sport for the last 20 years.