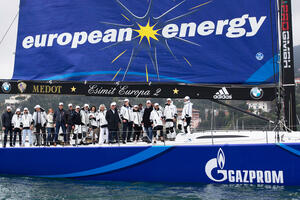 The Esimit Europa project is building bridges between the worlds of sport, business, diplomacy, social responsibility and culture. Fulfilling its mission the Esimit Sailing Team welcomed the EBC European Business Congress Working Group Energy onboard as part of the program of one of their regular sessions that was held in the fascinating environment of the historic coastal city of Lerici near the famous Italian natural resort Cinque Terre.

At the meeting the participants discussed the recent developments in European gas markets and new gas infrastructure in Europe, followed by a presentation of some examples of good practice, including the Esimit Europa project, which is represented by one of the world’s technologically most advanced sailing yachts Esimit Europa 2 and its multinational crew. It represents European energy in a unique way through the unifying power of sport, and by promoting the important values of collaboration, synergy and mutual trust which have been supported and recognised by several eminent diplomats, among them H.E. Ban Ki-moon, Secretary General of the United Nations.

“We are fulfilling our part in the responsibility for a more energy efficient future by inspiring dialogue among Europeans and showing through the example of the Esimit Europa 2 yacht and its crew that by action, collaboration, determination, efficiency and power we can make a difference, achieve our full potential and build a strong and united European Continent,” said Igor Simčič, founder of the Esimit Europa project, when he addressed the audience at the meeting.

He then invited the participants of the meeting on board the Esimit Europa 2 yacht for a unique sailing experience. In wonderful sailing conditions with winds of about 17 knots, they had the chance to personally experience how the power of nature meets one of the most powerful sailing boats – one that is still unbeaten in the Mediterranean.

More about EBC European Business Congress
EBC European Business Congress is an international non-governmental and non-profit organisation that has 137 members from 24 OSCE states. It was founded with the aim of supporting the development of economic co-operation between and within OSCE-countries, promoting economic development in OSCE countries and promoting a sustainable dialogue between politics and private business. Its members are fulfilling their objectives by open and trustful discussion of actual challenges and problems of common interest in the various Working Committees and subsequent formulation of practical solutions, passing on  such results as recommendations to governments and authorities in OSCE countries as well as to other NGOs.  The core activity of the EBC, which distinguishes the EBC as something unique, is to offer a platform for open discussion in the various Working Committees and Sub-Working Groups, which convene approximately four times a year. The Working Group Energy is one of seven Working Committees that have been formed up to now.