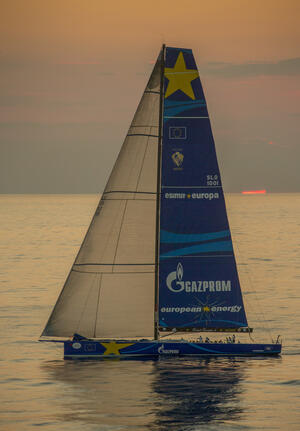 Esimit Europa 2 crossed the finish line of the Giraglia Rolex Cup in Genoa at 17:27:58 CEST as first in the fleet - and just about 6 nautical miles ahead of its closest competitor, another 100-footer, Magic Carpet. The 243 nautical mile race from Saint-Tropez to Genoa via the Giraglia Rock was attended by a record 240 yachts from 20 countries, but light winds on the day did not allow Esimit Europa 2 any chance of improving on the amazing record it set in 2012 when the yacht completed the race in just 14 hours, 56 minutes and 16 seconds – albeit sailing in very different wind conditions.

With an elapsed time of 29 hours 11 minutes and 58 seconds of sailing in moderate to light and very light wind conditions, Esimit Europa 2 was the first to complete the 243 nautical-mile course of one of the most renowned offshore races in the Mediterranean, setting off from Saint-Tropez, sailing around the rocky Giraglia Island and returning back to Genoa. By crossing the finish line at 17:27:58 CEST Esimit Europa 2 earned already her 5th line honours victory at the Giraglia Rolex Cup and her 38th consecutive line honours victory since her christening in 2010.

The founder of the Esimit Europa project, Igor Simčič commented: "I am very proud of our yacht and our team that we won the Giraglia Rolex Cup for the fifth time, this victory is another proof that all the right choices were taken by the crew. It is even more of a special reward in the year that marks the 20th anniversary of our project, an occasion we will celebrate on 29 August in Monte Carlo, at our home yacht club, the Yacht Club de Monaco."

After the start at 12:16 Esimit Europa 2 led the fleet out of the legendary bay of Saint Tropez under blue skies in light easterly winds but when the crew reached the mark at La Fourmigue about two and a half hours later, a south-westerly wind began to fill in. “At that point we had a lead of about a 3 nautical miles on Magic Carpet and the wind was filling in just from the rock so it was perfect, we were able to break a little from the rest. Gradually the fleet sailed down behind us with the new wind and the race became very tactical, with crews choosing different sides of the course. We chose the south side of the rhumb line where conditions suited us most, so we came to the rock with a lead of about 24 nautical miles over our main opponent, which was really good. We always knew from the forecast that the fleet would compress as we hit the light air first, so were prepared to have our lead eroded, but we had done a good job getting a good lead over the fleet, so when we left the rock towards Genoa we had enough of a lead, so they were never able to catch us,” explained Adrienne Cahalan, one of the world's leading navigators and weather routers who was navigator of the Esimit Sailing Team for this race.

The skipper of Esimit Europa 2, Jochen Schümann said: “We are happy and lucky to come first here and win for the fifth time. This was not the slowest Giraglia Rolex Cup Race for us but it became quite long one, because we stopped twice – first off the northern tip of Corsica close to the Giraglia rock – we struggled to get away from the rock there and also we lost the bulk of our lead which we managed to gain, but also the approach to the finish was very slow for a while. What was important is that we had a very good start and we were able to control the race from the start, fulfil our strategy and defend a good position against Magic Carpet and the rest of the fleet. We had a very good race, also the inshore races that we sailed in good wind conditions in Saint Tropez helped us to prepare well for this race, so everyone was tuned in and we performed very well.”