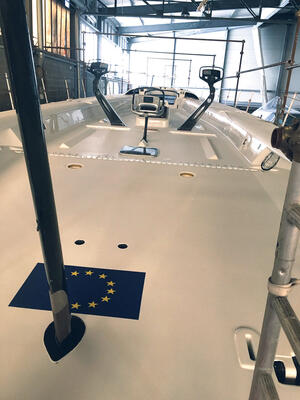 Following the 20th anniversary of the Esimit Europa project and after a highly successful season 2015 for the Esimit Sailing Team, one of the world’s fastest sailing yachts – Esimit Europa 2, is now ready for new challenges.

A vast variety of maintenance work has been performed on the Esimit Europa 2 yacht since the end of the season 2015. During the winter the yacht went through an intense renovation processes and several improvements and technical revisions were made. Furthermore, Esimit Europa 2 has also been repainted and is now in optimal condition to set sail towards new challenges.

By sailing under the European flag the mission of the Esimit Europa project is to unite people and promote stronger collaboration on the European continent by building bridges between the people in the worlds of sports, diplomacy, social responsibility, culture and business.

Hence, the Esimit Europa project in the last weeks received several new diplomatic supports, for being a unique example, showing that with a firm vision, determination and a team spirit, Europe can achieve great success and reach its full potential. Among them, the project received the support of Frank-Walter Steinmeier, Federal Minister for Foreign Affairs of Germany, Kolinda Grabar-Kitarović, President of the Republic of Croatia, Dr Heinz Fischer, Federal President of the Republic of Austria and Sebastian Kurz, Federal Minister for Europe, Integration and Foreign Affairs of Austria.