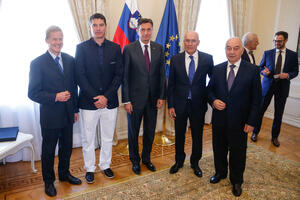 The Esimit Europa project has been following its mission of uniting people and promoting stronger collaboration on the European continent by building bridges between the people in the worlds of sports, diplomacy, social responsibility, culture and business for more than 20 years.

It all started in 1995 by connecting the two border towns of Gorizia in Italy and Nova Gorica in Slovenia. Since then the project developed into a worldwide dimension, representing all Europeans by achieving great diplomatic support and outstanding results in sport with 39 victories achieved in 39 races and by setting 6 course records along the way. With our multinational crew coming from 11 different countries we are always striving to improve our potential and push the limits with unique projects.

Since the very beginning the project enjoyed the support of Borut Pahor, at the time president of the National Assembly of the Republic of Slovenia. Today we are honoured for also receiving his honorary patronage as the President of the Republic of Slovenia to the Esimit Europa project and our future plans to take the project to another level, which will symbolize a technological collaboration of the European Union and the Russian Federation and strengthen the values of friendship and mutual trust on the European continent. We are grateful that President Pahor will also invite Vladimir Putin, President of the Russian Federation to jointly take over the patronage of the Esimit Europa project and its future-oriented symbol that would represent a unique example of collaboration between the European Union and the Russian federation.

Title : The President of the Republic of Slovenia extends honorary patronage to the Esimit Europa project and its future-oriented symbol
Date : Sep 29, 2016
Location : Ljubljana, Slovenia