Croatian President expressed his support for the project Esimit Europa 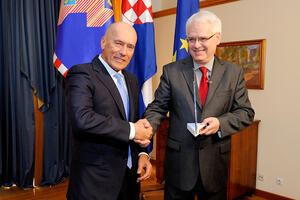 The Esimit Europa project interconnects diplomacy, business and sports in a unique way and through the winning performances of the Esimit Europa 2 yacht, which is flying the European flag, it carries the message of a successful united Europe around the globe.

"Esimit Europa is a wonderful and unique project connecting the whole of Europe and bringing Europeans together. Sailing under the European flag, Esimit Europa 2 is a strong symbol of unity, friendship and cooperation, and as such represents the true spirit of the European Union and European values," the President of Croatia, Ivo Josipovic, said on the occasion.

The crew of Esimit Europa 2 is composed of top sailors from eleven different countries, who compete together for Europe.

"I am honored that the President of Croatia has joined the supporters of the European project. In addition to the Croatian representative in our team, we now also have the diplomatic support for the project. This is yet another symbol of the good cooperation between Slovenia and Croatia, especially when we can see that two excellent sailors - members of our crew, Slovenian Vasilij Žbogar and Croatian Ivan Kljaković-Gašpić, who compete against each other at the world championships and the Olympics, compete together for Europe on our team!" said Igor Simčič, founder of the Esimit Europa project.

The Esimit Europa 2 has so far won all 33 races it has attended since its Christening in 2010. This Sunday, October 12, she will compete for the fifth consecutive victory at the famous Barcolana, the largest single-start regatta in the Mediterranean. "Our team is in great shape, the boat is well prepared and fast in all conditions, so we expect to win this race,” added Simčič.