Congratulations to Vasilij Žbogar for the silver medal at RIO 2016 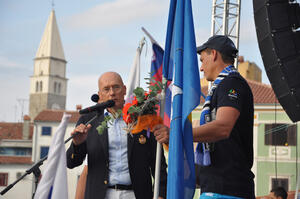 Founder of the Esimit Europa project Igor Simčič met a talented young sailor Vasilij Žbogar already at the very beginning of the Esimit Europa project 20 years ago and invited him to become a member of the sailing team composed of the best sailors from both sides of the border - from Slovenia and Italy. Vasilij Žbogar remained in the team as the main tactician and representative of Slovenia while the project developed, yachts became bigger and faster and the team became more and more professional - since 2010 the crew of the Esimit Europa 2 yacht is composed of only top professional sailors of eleven nationalities representing the whole European continent.

After the previous summer Olympic games in London in 2012, where Vasilij Žbogar took the 6th place in the Finn Class, Esimit Europa became his main sponsor in his attempt to achieve the medal at the next summer Olympics - Rio 2016. Now, four years later, we are very pleased that our good cooperation and Vasilij’s talent, skills, experience, along with his amazing perseverance and sincere desire led to the silver Olympic medal. "In addition to your sailing abilities and your fighting spirit during all 20 years that I know you, I always appreciated your sense of belonging to the team and to the Esimit Europa project. Congratulations in the name of our team and our skipper Jochen Schümann, I am very proud that we have such a champion to represent Slovenia in our multinational crew and I am looking forward to our further cooperation in the Esimit Europa project,” Igor Simčič congratulated Vasilij Žbogar for the silver medal in the Finn Class at the world’s major sport event - Rio 2016.

While thanking all of his supporters, Vasilij Žbogar especially stressed his gratitude to those, who believed in his potential even if he returned from the previous Olympics without the medal. Among them he thanked especially Igor Simčič for the main sponsorship by Esimit Europa for standing by him in all the years of preparations: “Without you, there would be no medal,” said Vasilij Žbogar in his thanks to Igor Simčič.